Enochsburg. Wow! look at these limestone houses! Oh, and the fried chicken is great!

A drive through southeastern Indiana took me into Enochsburg yesterday. Bordering Decatur and Franklin counties, Enochsburg, like much of this area, was settled by German immigrants.  Smaller than nearby Oldenburg, which was and is a Catholic community, Enochsburg's forefathers and -mothers were German Evangelicals. These stalwart immigrants built a stone church on a strong foundation in 1858.  The church still stands today, although the centerpiece of the community is probably the Fireside Inn, which draws a large regional clientele to its tasty fried chicken.

I've eaten my share of fried chicken, but these days it's the limestone church, houses and nearby bridge that fascinate me more. With apologies for my blackberry-snapped photographs, here's a little bit of what's charming about the countryside's built environment in this area. 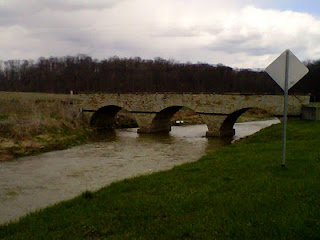 Decatur County isn't, but should be, famous for its beautiful, arched limestone bridges.  A very early limestone industry sprang up in Decatur County (the foundation stone for the second Indiana State House came from Decatur County). This triple-arched bridge on County Line Road just south of Enochsburg is just one example of how the county made aesthetic and practical use of its limestone. Off to the west of this bridge on CR 150 S, is another example, a beautiful stone house. 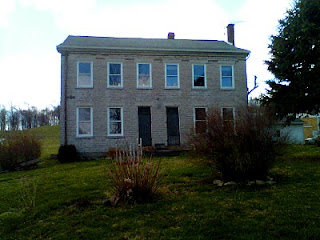 Although there are metal numbers on the facade of this great vernacular style house that date it to 1880, I suspect it's an even earlier example. Probably from the 1860s.  Isn't she a beauty?

Travel north on County Line Road just a bit and there's another equally beautiful limestone house sitting on a rise, still partly sheltered by the cedar trees that were probably planted in an allee leading to the front door at one time. 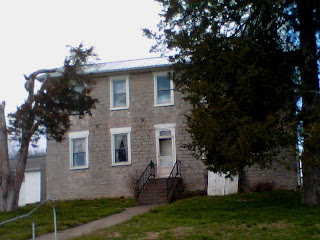 A number of limestone outbuildings remain at the modernized farms nearby and behind some of the more modern bungalows in Enochsburg proper.  These outbuildings attest to the easy pickings for scraps and overburden that were leftover from harvesting stone for proper buildings.  Limestone outcroppings are still visible along the creeks and waterways of the area, too.

Finally, like the German settlers before us, we reach Enochsburg's grand limestone church.  Placed on the highest spot in town it was once the figurative center of community and culture.  It's a beautiful old building; marked 1858 on the gilded tablet in the facade.  Perhaps less of a draw these days than the Fireside Inn's fried chicken, this church reminds us why Enochsburg is here and how our ancestors made the highest use of a local material. 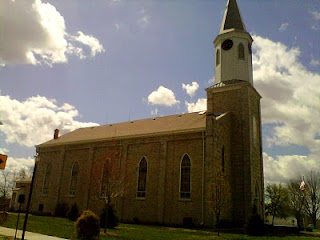 A Year at the River
Connie Zeigler is the keeper of this blog and president of C. Resources. This year I'm exploring rural river life. It's a non-adventure experiment. Oh, and I'll be in Indianapolis 3 days a week for my business and my urban fix.

Promote Your Page Too