Oh Carmel, you hurt my eyes!

Drove to Carmel, Indiana, today to take a picture of the first home that Avriel Shull, a modern home designer/builder, constructed in that town when she was 23. Her house, the Golden Unicorn, holds up well as a design, despite its age. The Golden Unicorn, named for the animal Avriel mounted by the door was built in 1955 as I recall.

What doesn't work as a design statement in that town is the new construction going up along Rangeline Road. Ouch! My eyes hurt when I see all the cribbed fake historic building styles jammed into this one hulking behemoth of a building. 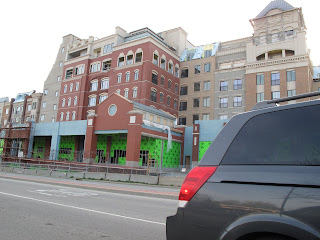 Why? With the funds that Carmel has available and that Mayor Brainard is willing to spend, why put money into a cobbled together copy of old architectural styles? Wouldn't it be great if Carmel would spend its municipal funds on great new, Modern architecture? Instead of copying a Palladian design for your Performing Arts Center, why not a Calatrava or even a Gehry?

With the funding muscle that Carmel can muster, even with a mayor embattled over his budgets, why shouldn't that town be the next midwestern mecca of modern design? Show us something new. Spend your money on fabulous, even controversial designs, not on hackneyed copies of buildings with designs that look more or less like styles from more than 100 years ago. Carmel seems to be the main player in the public architectural game around here these days. It's sad that they are playing it so safe and uninterestingly.
Posted by A Year at the River at 7:40 PM

A Year at the River
Connie Zeigler is the keeper of this blog and president of C. Resources. This year I'm exploring rural river life. It's a non-adventure experiment. Oh, and I'll be in Indianapolis 3 days a week for my business and my urban fix.

Promote Your Page Too